The technology of preparing food has drastically changed over the last 300 years in Iowa. Our historical interpreters usually don’t begin working at Living History Farms knowing how to cook over an open fire, on the coals of an open hearth, or in a wood-fired cook stove. Historical recipes are also very different—standardized measurements really didn’t take hold in books until after the 1890s. Many historic receipts call for “butter the size of an egg” or “enough flour and milk to make a batter.” On Saturday, July 6, our 2019 college intern class will test the new cooking knowledge they have been practicing since arriving at the museum in May. At 9 am, their sites will begin to receive a “secret ingredient”. The intern will have two hours to prepare the item in the most historic way possible, using period technology. A panel of judges will tour between the sites, tasting and awarding points for the best dish! Food preparation begins at 9:30am at the 1700 Ioway Farm and moves through the historic kitchens throughout the morning, ending around 1pm. Join us with encouragement and a discerning eye for these intern food creations!

Women were the main food preparers in the Ioway culture. They were cooking over open fires, outside in the summer, and inside lodges in the winter. Cooking techniques made use of clay cooking pots, animal stomachs, and other natural products. Water could be boiled by placing hot stones in pots and animals stomachs which could not go directly over the fire. Often women kept stews going all day, and family members came and ate when they had time between tasks or were hungry.

Iowa pioneer settlers arriving in the 1850s, were giving up many of the comforts they were used to in the East. This included cooking technology. Most homes in the east had an iron cook stove in the 1850s—but these were heavy and expensive for early settlers to bring. These emigrants had to learn to cook over an over hearth, using basic cast iron or tin equipment. The logistics of hearth cooking seem straight forward. A good wood fire is started first thing to prepare for cooking and allowed to create glowing wood “coals.” 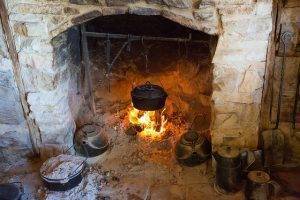 Directly over the fire is the “stovetop.” Settlers hung pots and kettles on hooks on varying heights of hooks to change temperature, and to boil. Frying pans on legs (called spiders) were set directly over coals to fry. Baking had to be done in a heavy iron pot, sometimes called a Dutch oven or a bake kettle, with legs and a lipped lid. Coals are raked under the kettle. Food is placed inside and the lid set over it. Additional coals are scooped into the lid circulating heat all the way around the item.

By 1875, railroads crossed the state of Iowa, bringing cheaper cast iron stoves, new types of pots and pans, and new exotic ingredients. Stoves could burn wood, coal, or even just corn cobs/twists of paper. The firebox sat to one side of the stove and a series of dampers circulated hot air around an internal oven and up the chimney. These stoves helped reduce the heavy lifting of iron pans and allowed cooks to more easily prepare many dishes as once.

By 1900, ornate, nickel plated cooking stoves could be ordered from Montgomery Wards and Sears and Roebuck for $50 to $75.