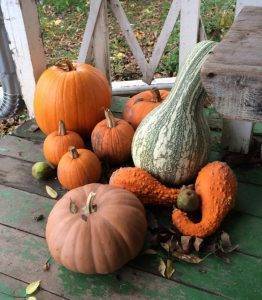 Have you ever been to a pumpkin patch? Do you visit one in October to grab a jack-o-lantern pumpkin? Maybe someone in your family has a great recipe for homemade pumpkin pie for Thanksgiving? Visiting a pumpkin patch has become a special trip for us now. But in the past, Iowa farmers grew lots and lots of pumpkins in their fields. Iowa’s first farmers, the Ioway Indians, grew pumpkins as one of their three most important crops. Pumpkins and squash were easy to grow and they could grow to large sizes.

Lots of kids today have never tried pumpkins as a food. Many people have never tried squash at all! Pumpkins can be very tasty when cooked just right – even the seeds can make a great snack! In the 1700s, Ioway kids would have pumpkin or squash on their plates (actually, in their bowls) almost every day. And the kids would have to help grow the pumpkins their family ate. 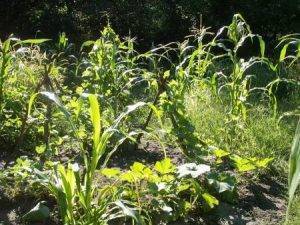 If you could see the Ioway’s fields, you would see tall stalks of corn with skinny vines wrapped around them. These vines had beans growing on them, climbing up the corn to get some sunlight. All around the ground, colorful pumpkins and squash grew, hiding under their big fat leaves.

Moms were the farmers of the family. But Mom had lots of help from aunts, grandmothers, and especially kids! After the older women had prepared and planted the gardens in the spring, the kids would help to take care of the plants and make sure that the crops were safe from weeds and animals. Of all the crops, pumpkins and squash really came in handy for the kids, because they helped keep animals away and kept the soil from drying out.

Since pumpkins have big leaves, they kept the soil shady. This kept the soil from drying out as quickly. That meant the kids didn’t have to water the plants all the time! Squash vines are also very prickly. Have you felt one of the vines at a pumpkin patch? This helps to keep out small animals that might want to eat the corn and the beans. Can you imagine working very hard every day to have good food to eat, and then waking up to find out animals have snuck in to eat your crops? The pumpkins and squash help to make sure that doesn’t happen.

When summer was over, Ioway kids would see that their squash had grown up into all sorts of different shapes, sizes, and colors.

Some of the squash would be cooked and eaten soon after it came off the vine. But most of it would be saved for eating in the wintertime, when no crops could grow.

The Ioway cut their squash and pumpkins into rings. The rings were hung on big drying racks. The sun and the winds dried the rings out, taking away moisture. The rings became dry, thin, and crispy. Families stored them in a cache pit – like an underground pantry – near the family’s home. When the family wanted to eat their dried squash during the winter, they would put it into soups and stews!

Mom would put the dried squash rings into some boiling water, along with dried corn, dried beans, and whatever meat had been gathered by the father. The Ioway family might have soup and stew all winter, until they could start growing some fresh food again. If you wanted to live like the Ioway, you’d need to like soups and stews! Those were the main dishes that the Ioway had to eat in the wintertime. And hopefully, you’d like pumpkins and squash too, because those were some of the main ingredients in their stews. 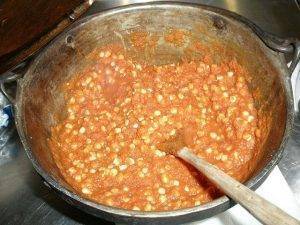 The Ioway had to grow all of their own food for hundreds of years. Today some families still grow food in gardens, but we also have grocery stores to help out. And we can buy pumpkin and squash whole or in cans. Next time you go to the store, see if you can find any squash – it is still very tasty after all these years! 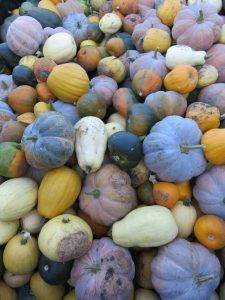 Parents and caregivers: The Ioway ate pumpkin and squash in stews, but there are many ways to introduce squash to kids. You can find kid-friendly recipes for squash here!